Welcome, here is our article on Typing “following me” in Facebook Block List shows followers? It’s just a hoax. Try and read to the end:

A message has been spreading across Facebook that users can see who is anonymously following them by going to the blocking section of their settings and typing in “following me”.
This is just the latest variation of a long-running hoax that more than likely originally spawned as a result of a misunderstanding of Facebook’s privacy settings. An example can be seen below –I Just learned something new. If you go to account settings, blocking, block users, and type in “following me”, without the quotes, you might be surprised just who is following you. I saw a lot of people on it that I had no idea who they were. They are currently blocked, I had to block them almost immediately. The creepy thing is most were middle easterners.
And all my posts are to friends, not public firstly – NO, typing “following me” in the Blocked users’ textbox does NOT provide a list of users who are following you. What it DOES do is bring up a list of users associated with the words you typed into the textbox – in this case, the words “following” and “me”. This can mean those words appear in a user’s name, introduction or any of their About Me sections. Given the rather generic nature of the words “following” and “me”, users who follow the instructions are more than likely going to see a rather random (and completely benign) list of Facebook users appear. 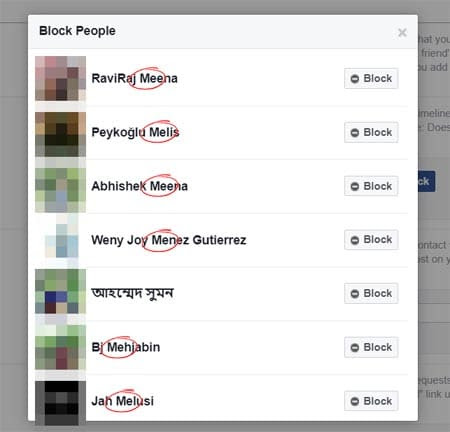 Users with either “me” or “following” in their name or profile will appear. Each Facebook user will get a random list depending on their Facebook connections, though, for some reason, some users tend to appear more often in this list than others. To reiterate, these users will have little connection with you and are certainly not following you. This is certainly not the first time this variation of nonsense has circulated online. This hoax traces back to around 2011 when a rumor urged users to type in the words “Automation Labs” into the same box to see their stalkers – instructions that unsurprisingly just delivered a list of users who had the words “automation labs” in their profile.
Then at the start of 2017 another variation of this rumor appeared, only this time recipients were urged to type in “Facebook Security” into the textbox which would [apparently] reveal a list of “paid stalkers”. But instead, it bought up a list of users with either “Facebook” or “Security” in their name or About section. Nonsense… yes. Why Facebook would implement a feature that would allow users to see their paid stalkers or “covert followers” seems oddly counter-productive, yet this logical flaw hasn’t seemed to stop these rumors from going viral, regularly.

In the case of this particular variant, if you do want to see who follows you, presuming you have the feature enabled, you can see by navigating to your timeline and looking underneath your introduction and clicking the Followed by… link (see the image.) Users who follow you can see your PUBLIC posts on their newsfeed. Posts set to Friends are only visible to friends, not to followers. (Learn more about the Facebook follow feature in our post here.) 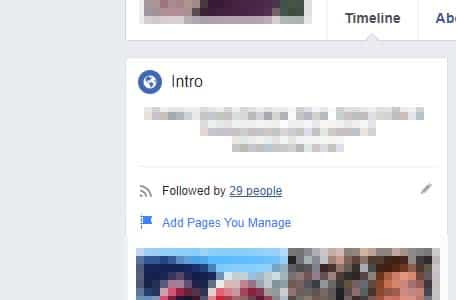 As such, claims that typing in “following me” in the Blocked user box will reveal users who are following you is just complete nonsense.

QuickNewsNg is your news, entertainment, music fashion website. We provide you with the latest breaking news on social media straight from the industry topmost platforms.
Contact us: coolieecoldex(at)gmail.com
© QuickNewsNg by MeritBronz
error: Content is protected !!
MORE STORIES

How to view your Facebook profile and page as someone else...