Home Edge Case How to Poke Someone on Facebook – Guide Both newbies and long-standing Facebook users are aware of the act of poking. If you haven’t grasped all it means to give someone a poke on Facebook, there is no need to worry, as you are going to learn how to use, it. So, what is poke sent on FB? Essentially, a poke is a mini-application on Facebook, which is available for every user. The feature allows you to send a single virtual notification to a Facebook contact; this is mainly what the pokes feature is meant to do on social media. Over time, the role of poking has widened and changed. Back in 2007, for example, poking was the trending thing, which was worth knowing. However, its popularity declined since then, and by 2011, it went into hiding on the site. After many updates to improve its functionality, Facebook chose to put it into hiding in the process. You can still view the Facebook poke app, though.

In earlier days, Facebook’s poking feature was cute and fashionable. Its timid approach to initiating communication became a popular flirting feature or simple hello. Although they exist today, pokes are not as accessible or straightforward, because they cannot be understood. The meaning of poke on Facebook has derailed over time and changed its meaning. Notice, however, that receiving a casual poke may be fine depending on who it’s coming from. For example, receiving one from your grandmother can be confusing. It can send mixed messages, which you may not make out quickly. If you are still confused about why people would poke you, here are some tips to help you get comfortable.

Fundamentally, poking is the same as using a like button, but with ambiguity. Poke is a feature that makes it possible for users to show an interest in friends. It helps users evade the tedious process of crafting statements of introduction. You can, therefore, seek attention with minimal effort or find an excuse to flirt with your crush.

Today, people interpret the poke feature in many different ways. Facebook management admits that when they first introduced it, there was no clear intention or purpose. It was a fun feature without a specific person. It is, therefore, upon every user to initiate their own meanings and use them the way they need. While some people enjoy using the feature, others feel irritated when they are poked. Not everyone finds this “poke” feature sweet or impressive, some people see them as creepy, but this depends on one’s personality. If you have frequented Facebook in the recent past, you will notice that the fun of having a wordless interaction without the risk of engaging in political commentaries or other sensitive issues.

The poke is no longer a popular thing anymore. Its use declined consistently over time and is no longer a trendy thing to use lest you irritate someone you thought you would impress. It is now an outdated flirting method arguably. Today, DMs and direct messages have become the new way to gain the attention of your friends on Facebook.

To begin poking, you should first select the appropriate victim, check out their profile. Decide on whether the person you want to poke has an idea of what you want to do. Is the person expecting a message from you or knows what you need to pass across? Select the ‘—‘ button, which is located near the Message button. Here, you will have the drop-down menu with several options, and poke is one of the items. Your victim will receive a notification from you.

Facebook currently describes poking as a simple way to just say hello to a friend or mutual friend… or just another means of their attention. “Facebook users poke their friends or friends of friends on Facebook for several reasons. Is poking on Facebook flirting? This might have been true for the earliest generation of Facebook users.

When pokes are exchanged back and forth between the users, a poke war emerges. There is no big deal about poke wars, as they only end when one of the users exchanging the pokes gets tired and stops poking. There is no much meaning to start a poke war outside of out-poking the user on the other side.

The Facebook Poke Button Is No More. While it’s true you can still poke your friends on Facebook; it won’t be via the Poke Button. It’s a more subtle feature now. Facebook has quietly tucked this feature into a pull-down menu in the right-hand corner of profiles. You can easily access Facebook pokes by using the URL (web.facebook.com/pokes) or as stated earlier, goto the right hand corner of the users profile you wish to poke.

Whenever you are not interested in a poke or feel like you will poke back, you can ignore it altogether. This is not disrespectful because, in the first place, there is no much meaning with the poke anyway. If you are not ready for a poke from someone, Facebook allows you to delete any Pokes by simply selecting the gray ‘x’. You will not be viewing any notifications. If they continue, however, you can block the sender especially if you are not friends with this user. You can always choose to block the sender if you are not interested or if the person is not a friend.

Facebook does not allow its users to send multiple pokes to one victim. It is only until the person responds that the sender can proceed. This regulation helps to keep recipients of the pokes safe from continuous irritation especially if they are not interested. This limitation is necessary for maintaining the sanity of poking business. It means recipients will not be harassed by users or find extraordinary pokes from the same person.

In conclusion, poking can be a fun way to make use of online time, but as long as you do not harass the recipients. If you receive a poke and is not sure how to handle it, do not take it as a big deal, as you can easily ignore it and move on.

For more helpful hints and guides on the poke feature, visit (https://www.facebook.com/pokes)

Can’t See Who Poked Me On Facebook – How to View Who Poked You On Facebook Mobile
Heard a lot about the Facebook Poke feature? Now you can see a finger-like icon on your notifications panel but doesn’t know who is behind the hand. Well, if you want to see who poked you on Facebook or you just want to figure out how to poke them back? This article explains it all.
Let’s get started on how to see who poked you on Facebook using desktop and mobile devices.
The Facebook poking feature is still a functional one. You can poke anyone at any point in time. If you want to see where Facebook is hiding all your pokes including the pokes people poked you plus suggested pokes, this article will be of immense help. So proceed to find out where and how to poke someone on Facebook through this article!

Facebook users are given the option to poke their friends or friends of their friends on Facebook. When a user pokes someone, the user who was poked will get a poke notification. 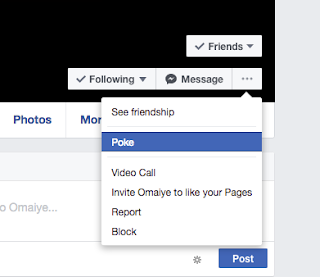 A “poke” on Facebook social networking website Facebook is used to bring in the attention of other users — there are no set guidelines about how pokes can be used. However, they can be used as basic tips, as friendly greetings, and for numerous other functions.

Friends who poked you will be shown on the side of your Facebook News Feed when you first log in, and if you want you can decide to subscribe to get email alerts of pokes. You can choose to poke back or neglect poke message.

Some people have the wrong understanding that pokes on Facebook is a symbol of disturbing or flirting. The following are the correct meanings of Poking on Facebook.

1. A “poke” is someone trying to get your attention. It’s one of the meaningless features that are used to annoy someone.

2. If you poke someone, not in your Facebook friends network and they poke back. You can view their profile even if you are not their friend!

3. A poke is when you allow someone to see your Facebook profile for three days, so they can know who you are and hopefully add you as a friend.

Where to check How Many Pokes You’ve Received

You can see how many pokes you’ve sent on your Facebook pokes page. It will begin showing your pokes activity with a friend after you’ve poked them more than once.

I hope this guide covers the Facebook Poke feature and helps you fully understand how it can be used, how to see your pokes and reply pokes? Remember the Facebook poke feature has no definite meaning, just a show of attention, most users assume.

ABOUT US
QuickNewsNg is your news, entertainment, music fashion website. We provide you with the latest breaking news on social media straight from the industry topmost platforms.
Contact us: coolieecoldex(at)gmail.com
FOLLOW US
© QuickNewsNg by MeritBronz