How to View My blocked List & Unblock Users on Facebook: Blocking a pal on Facebook might be the only remedy to unwanted posts and comments or it might be a result of a continuous disagreement between you and the individual which is becoming tense gradually. It can also be as a result of you avoiding to become friend with someone or prevent friends becoming foes. Whatever reason it might be, this article teaches you how to block a close or unwanted friend on Facebook. Follow the procedures below to block a friend

I’ve had to block a number of weirdos and creeps on Facebook in the last few years, including one ex who just wouldn’t stop bugging me. Now I’d like to review the list. How do I see who I’ve blocked on Facebook?

Sounds like you’ve had more Facebook adventures than a lot of people, particularly the creepy stalker ex bit. Then again, I know a lot of people who have issues with a friend or two. Or should I say “friend” in quotes since really, if they’re creepy and bugging you, they’re probably not actually a friend, right? Social media overall has really forced us to redefine this whole concept of a friend, actually, and now your friends are just as likely to live 2500 miles away as they are to be down the street.

On a site where people share often intimate details of their lives, it’s also a fertile ground for creepy people to be, well, creepy, paying too much attention to others rather than focusing on their own lives.

And so Facebook is one of many social media sites where there is indeed the ability for you to permanently block someone from being able to track you, see what you post, comment on your photos or even email you. Facebook explains this important nuance of the process too:

Blocking is reciprocal, so you also won’t be able to do things like start a conversation with them or add them as a friend. Keep in mind that blocking someone may not prevent all communications or interactions such as in apps or groups and only affects your experience on Facebook, not elsewhere on the web.

Turns out that with the recent redesign, it’s surprisingly easy to see who’s on your own block list.

Step one look for the icons on the top right of your own Facebook page. Any page:

See the tiny padlock with the lines adjacent to it? That’s the menu you want, it’s privacy and security.

Move the cursor over it and a menu pops up 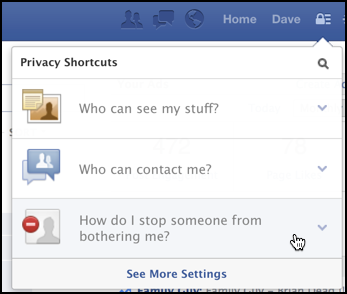 It’s the third option you seek.

Click on “How do I stop someone from bothering me?” and it expands with a bit more information:

There you go. It’s right there! Click on “View All Blocked Users” and it shows you, everyone, you’ve blocked throughout the years: 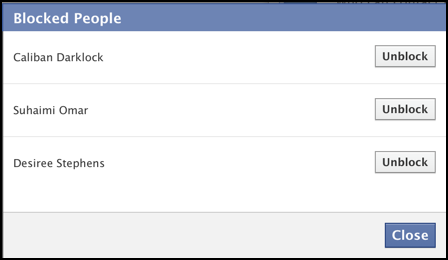 Yes, you can see I have blocked Caliban, Suhaimi and Desiree. All because of incessant spamming, actually.

To give someone a second chance, all I need to do is click “Unblock” and they’re no longer blocked from seeing whatever you post or share to the public.

The quickest way to view all your blocked friends is to access it from this link https://web.facebook.com/settings?tab=blocking

Public? What about being friends? Nope, not quite. Here’s how Facebook explains it:

Note: Removing a block will not restore the friend connection. If you block a friend and then remove that person from your block list, you’ll need to send them a new friend request.

I hope this guide was helpful?